Year 14 of WELSTech is in the books. Tune in for Martin and Sallie’s favorites from 2021! Picks of the year

The WELSTech Christmas week special this year features Nicole Balza, and she updates us on all that’s happening with Forward in Christ magazine and especially with their digital offerings. Merry Christmas WELSTech-ers!

Two years in – Martin and Sallie welcome Nicole Balza, who many will recognize from the Together video update, but you may not know that Nicole is also an editor for Forward in Christ magazine.

We spoke to Nicole about Forward in Christ previously on Episode 619, and she’s back to update us on their digital emphasis over the past two years. Check out everything available at forwardinchrist.net.

Martin and Sallie share favorite memories and picks of the year from WELSTech 2021.

WELSTech welcomes the Advent and Christmas season with 5 ways to share the good news of our Savior’s birth. Also listen for ideas for building your church bulletin, Martin’s latest hardware pick (with a wire), and tools for telling the next generation. Plus, Sallie’s go-to video editor saves the day, and we announce the Bible verse of the year! Go, Tell It – Martin and Sallie give you five ideas for sharing your Christmas joy.

Telling the Next Generation

Nicole Balza, hostess of Together video updates, joins us with an update on Forward In Christ magazine.

Image by u_gzwjc5ts from Pixabay

We’re back with another lively edition of WELSTech featuring the co-hosts with the most – Rachel Feld and Jason Schmidt. Jason shares details about his upcoming WELS Education Conference presentation, Rachel isn’t losing her keys, and Martin shares an online video creation tool. Plus there’s job opportunities, professional development, and much more to explore. Join the conversation! Blended Learning – Voice, Choice, Pace, and Place – Tools to Support Blended Learning is the title of Jason Schmidt’s presentation at the upcoming WELS Education Conference. Jason shares details of what participants can expect in this timely session. The conference will take place June 20-22, 2022 at the Ingleside Hotel in Pewaukee, WI.

Upgrade to the New Windows 11 OS

Coming up next on WELSTech

Photo by Annie Spratt on Unsplash

WELSTech this week answers the why, what, who, how and where questions around policies and procedures for church and school. There’s also much to share about Adobe, the iPad mini, Christmas concert date announcements, and free tools for organizing goals and meetings. Plus, the WELSTech mailbag is full! The time is now – Martin and Sallie share encouraging words for churches and schools to consider the many policies and procedures needed to effectively ensure security and privacy, document processes, and support members, employees and volunteers with the highest standards and consistency.

How to Edit your PDFs in Your Browser Using Adobe Acrobat

Mark your calendars for December Christmas concerts, either in-person or live streamed

We’re joined by Rachel Feld and Jason Schmidt for details on edtech at the Ed Conf!

Image by u_gzwjc5ts from Pixabay

This episode of WELSTech is all about web design. Listen for tips and areas of focus to enhance your ongoing website efforts, web designer leads, if you choose to go that route, a color pallet tool, and an online conference topic about digital outreach. Plus, Sallie is searching tabs and Martin’s getting rid of distractions. WELSTech goodness awaits! No finish line – The design process for your church or school website is never done. Martin and Sallie discuss concepts covered in Adobe XD’s Web Page Design: A Comprehensive Guide.

From WELS Congregational Services – The Foundation is a new set of resources that helps churches allow the gospel message heard in worship to echo throughout the week, edifying God’s people. Year C Advent and Christmas resources are available for download at https://welscongregationalservices.net/the-foundation! Learn more …

We’re talking policies and procedures – the why, what, who, how, and where! In this episode of WELSTech we’re introduced to PKM, an organization method for notes, research, and ideas. In addition, we’re talking about humane technology, sharing Kindle books, and prayer options in the YouVersion Bible app. Plus Martin gives us a mini-German lesson! Welcome to the season opener of WELSTech! We’ve packed this special episode with our favorite edtech guest hosts, exciting announcements about the upcoming WELS Education Conference, a first-hand review of the iPhone 13, lots of Logitech love, and a new Christian Worship digital lectionary. All this, and you can consume it in either audio or video format! Fancy like!!

It’s a full house on WELSTech today as Martin and Sallie kick off a new season and are joined once again by our favorite education technology guest hosts, Professor Rachel Feld from Martin Luther College and Jason Schmidt, Executive Director of Wisconsin Virtual School.

And if that wasn’t enough excitement, WELSTech is re-introducing video! Our audio podcast continues without a blip, but now listeners will have the option to be watchers, if they prefer video!

WELS Education Conference – Paul Patterson from WELS Lutheran Schools joins the conversation to share some of the first details about the upcoming WELS Education Conference, June 20-22, 2022 at the Ingleside Hotel in Pewaukee, WI. Under the theme United in Christ, Diverse in Service, attendees will choose from topics in six strands – Feedback and Assessment, Higher Order Thinking, Student Achievement, Student Centered Classroom, Social Emotional Learning, and Leadership in Ministry. There’s much for educators to get excited about!

Coming up next on WELSTech

Learn a new acronym – PKM – and the ideas behind Personal Knowledge Management. WELSTech is back with LEGO news and a wrap up of the book discussion of A World Without Email. Martin shares a free tool for creating diagrams and flowcharts, and the community mail bag includes the ability to ride along with a raindrop. Did we mention LEGOs? Protocols & Specialization – Martin and Sallie conclude the discussion of A World Without Email by Cal Newport with practical suggestions for improving workflow and moving away from the hyperactive hive mind way of working.

Coming next on WELSTech

A new season of WELSTech kicks off, loaded with all kinds of WELSTech goodness, of course! We welcome guest hosts Rachel Feld and Jason Schmidt as well as Paul Patterson from the Lutheran Schools Office who will preview the upcoming WELS Education Conference 2022. All that, and we’re adding video to the show too! 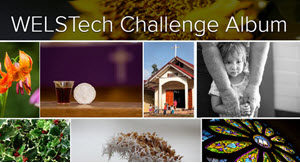